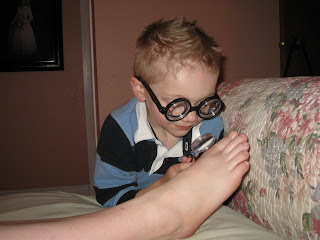 A few weeks ago during one of my cleaning furies I jammed my big toe into the piano. I don't understand why everyone keeps asking me if I was mad and kicked it on purpose? But anyway, I read online that if you could walk on it then it wasn't broken. So I pushed on through my normal routine for a couple weeks. Then after a particularly long day on my feet last weekend I seemed to have re injured my foot.

By Monday I found myself at The Foot Doctor for X-rays where I was given the ugliest little shoe to wear. Following that was a night of hysterics in the ER when the pain became unbearable and I was finally given some hydrocodone to deal with the pain. The next day after I was finally in "cookie oven heaven" (the place where I go when I am on drugs) I had an MRI to seal the deal. we were told it wasn't broken, but had some obvious trauma. I was given some wonderful pain meds and crutches and told to stay off my foot for week or so. This wasn't a problem because the swelling had become so severe I could hardly put weight on my throbbing foot anyway.

A week later the bottle of pain meds is empty and the swelling is almost gone. I have had enough of being waited on and just have to start picking things up around here as the house pretty much begins to fall apart without me doing everything! Don't get me wrong, Kenneth and Awsumb were great...Awsumb even volunteered to clean my bathroom sink while he was cleaning his own bathroom. And Kenneth was very patient with me even at 3am during the "ice on, ice off" episode. But it's the little things that go unnoticed. And for anyone living with OCD it's the little things that drive you crazy when they are left undone!

So I am trying to get back into my normal routine. I have abandoned the crutches and am hobbling on the good side of my foot (which will in turn make it the 'bad side' eventually I am sure). Yesterday we celebrated "Pico de Gallo Day" (as Awsumb kept saying - at least we didn't go to a Luau to celebrate Cinco de Mayo!) by going out to our favorite Mexican restaurant. It had been a long day and by the time we arrived home I realized I had over done it and my foot really hurt.

I laid on my bed and called for a "foot doctor" (Kenneth) to come and check out my foot. At rest my toe didn't seem to line up correctly and it was really hurting. Awsumb hears this and disappeared into his room to find his doctor kit. He couldn't find it and raided his Spy Kit instead and came out with his Nerd glasses, a magnifying glass and a toy pincher.

"Don't worry," Awsumb assured me. "I will only use the grabber if the toe is broken off to pick it up so I don't get an infection from all the blood" OK, that's a little gross. So he begins his examination asking when the injury first occurred, what pain meds I was currently taking, etc. while taking notes. His diagnoses was, "200mg of Advil 5X a day. BUT, not 6 because then it could lead to all these other problems and get worse." Then he billed Kenneth $10 for the examination. Kenneth only had $8 so he gave us the family discount and called it good!