Look at these cute 'sushi peeps' (rice krispy treats wrapped in fruit rollups) some friends dropped off today.  Everybody loves springtime... there's baseball, tulips, daylight savings time, chocolate bunnies and of course, the celebration of the Resurrection of Jesus.

Many years ago a friend of mine brought over this Easter basket filled with numbered eggs, which are filled with small objects and slips of paper that tell about the Resurrection of Jesus.  Every year we turn to the basket for a quick object lessons at church and family home evening.  Kenneth usually shares it with his home teaching families.  I am often asked if I have a copy of the scriptures, so here you are... 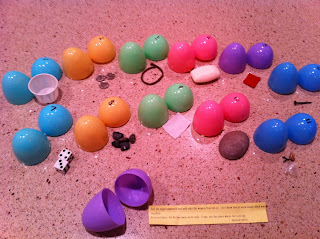 “And he went a little further, and fell on his face, and prayed, saying, O my Father, if it be possible, let this cup pass from me: nevertheless not as I will, but as thou wilt.”

“Then one of the twelve, called Judas Iscariot, went unto the chief priests, And said unto them, What will ye give me, and I will deliver him unto you? And they covenanted with him for thirty pieces of silver.”

“When the morning was come, all the chief priests and elders of the people took counsel against Jesus to put him to death: And when they had bound him, they led him away, and delivered him to Pontius Pilate the governor.”

“When Pilate saw that he could prevail nothing, but that rather a tumult was made, he took water, and washed his hands before the multitude, saying, I am innocent of the blood of this just person: see ye to it. Then answered all the people, and said, His blood be on us, and on our children. Then released he Barabbas unto them: and when he had scourged Jesus, he delivered him to be crucified.”

“And they stripped him, and put on him a scarlet robe. And when they had platted a crown of thorns, they put it upon his head, and a reed in his right hand: and they bowed the knee before him, and mocked him, saying, Hail, King of the Jews! And they spit upon him, and took the reed, and smote him on the head.”

“And after that they had mocked him, they took the robe off from him, and put his own raiment on him, and led him away to crucify him. And as they came out, they found a man of Cyrene, Simon by name: him they compelled to bear his cross.”

“And they crucified him, and parted his garments, casting lots: that it might be fulfilled which was spoken by the prophet, They parted my garments among them, and upon my vesture did they cast lots. And sitting down they watched him there.”

“Jesus, when he had cried again with a loud voice, yielded up the ghost. And, behold, the veil of the temple was rent in twain from the top to the bottom; and the earth did quake, and the rocks rent; Now when the centurion, and they that were with him, watching Jesus, saw the earthquake, and those things that were done, they feared greatly, saying, Truly this was the Son of God.”

“When the even was come, there came a rich man of Arimathæa, named Joseph, who also himself was Jesus’ disciple: He went to Pilate, and begged the body of Jesus. Then Pilate commanded the body to be delivered. And when Joseph had taken the body, he wrapped it in a clean linen cloth, And laid it in his own new tomb, which he had hewn out in the rock: and he rolled a great stone to the door of the sepulchre, and departed.”

“Pilate said unto them, Ye have a watch: go your way, make it as sure as ye can. So they went, and made the sepulchre sure, sealing the stone, and setting a watch.”


Egg 11: Tiny bag of spices (Mark 16:1-4)
“And when the Sabbath was past, Mary Magdalene, and Mary the mother of James, and Salome, had bought sweet spices, that they might come and anoint him. And very early in the morning the first day of the week, they came unto the sepulchre at the rising of the sun. And they said among themselves, Who shall roll us away the stone from the door of the sepulchre? And when they looked, they saw that the stone was rolled away: for it was very great.”
Egg 12: An empty egg (Mark 16:5-6)
“And entering into the sepulchre, they saw a young man sitting on the right side, clothed in a long white garment; and they were affrighted. And he saith unto them, Be not affrighted: Ye seek Jesus of Nazareth, which was crucified: he is risen; he is not here: behold the place where they laid him.”
What does your family do to remember the Ressurection?
Posted by Wendy Jean at 7:26 PM 0 comments 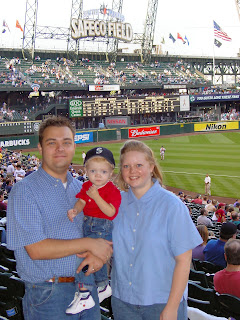 Awsumb, Kenneth and Wendy
August 2003 Safeco Field
Baseball season is finally here!  You know you have been season ticket holders too long when you have favorite ushers and you know the vendors at the stadium and all their little silly rhymes... When Awsumb was in preschool the teacher reported he loved to play with the toy cash register and yell, "Beer, here!"

I don't know what it is about baseball, but I just love it!  I always have... though Kenneth will beg to differ because his memories of me as a teenager watching baseball were more about me reading a fashion magazine and not paying attention to the game at all.  Kenneth and I often argue about what our first "date" was because we didn't "date" so much as become friends and decide to get married.  But one of our earliest memories of each other is when on family vacation our parents planned for us all to meet up at a Dodgers-Cubs game in the 80's. I still have my ticket stub!

But that's just the thing... Baseball isn't just baseball, it's being out in the open air on a warm summer evening.  Even if you don't like sports, how can you not love an evening at the ballpark?

To some people baseball might seem slow or even boring...  which honestly might be some of the reasons I like it - there is plenty of time for me to talk AND figure out what's going on!  Actually, it's really a game of strategy and I think that's why I love it so much!  It's all about the figures, numbers and stats!

Baseball is like a good novel...  introduce characters, set up a basic plot, add a twist and hope for a happy ending!

The game of baseball is not unlike a lifelong, well-worn, comfortable love affair: After a time, you know what to expect, but you can never predict what will happen. You also learn how to forgive," writes Anna Holmes on Why Smart Women Love Baseball

As Kenneth and I come up on 16 years of marriage we are like a baseball game, well worn and comfortable.  And although we know what we can expect from each other, we can never predict what will happen next - and yes, we both have learned how to forgive!

From little league to major league I rather be at the ballpark than just about anywhere else on a summer evening!  I'm not alone, baseball is often referred to as The Great American Pastime and just maybe it really does have magical powers to heal broken hearts as it did after 9/11 as seen in Nine Innings From Ground Zero.

I do have one pet peeve regarding baseball...If you know what's good for you - you'd better remove that sticker from your cap!
Posted by Wendy Jean at 2:07 AM 1 comment

I guess my little guy is getting too old for Easter pictures with his little argyle sweater vest.  But I had to get some spring portraits so I grabbed his new baseball hat, favorite new comic book and we ran out the door to get a couple snaps from the quick photo place at the mall.
Definitely a smug-mug... but too cute for words!
Awsumb just happened to be wearing this shirt today...
he would wear it everyday if I let him! 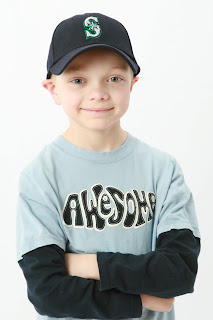 I just love that every time Awsumb gets a new hat
that's a little big, it make his ears stick out! 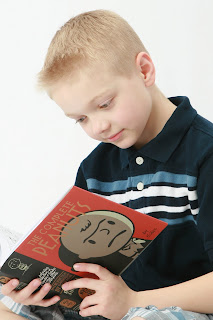 I am not sure who wanted this book more,
Awsumb or Daddy,
but as soon as I saw it I knew it would
be coming home to live with us!
The Complete Peanuts
Vol. 1 by Charles Shulz
Vintage comics in chronological order...
Awsumb was just as fascinated by these old Peanuts strips
as the first time he saw original drawings of Mickey Mouse 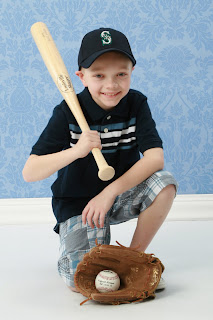 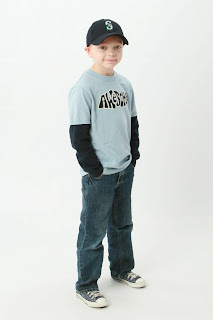 All too grown up! 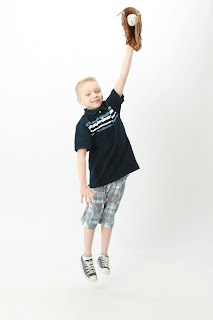 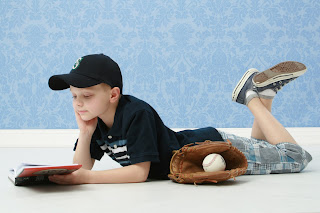 You can never buy just one!
Click Summertime to read about the reason I started taking my own props for pictures
Posted by Wendy Jean at 1:04 AM 0 comments

Dangerous things you should let your children do... 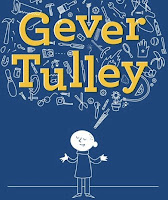 We fill our kids schedules with classes and team sports,  make them wear bike helmets and football pads to play on anything with wheels.  Why are we sheltering our kids so much today and what from?  Is the world really so different?  Of course we want our kids to be safe.  But maybe we are limiting exploration and free play a little too much.  It's time to rethink some of our restrictions...

In Jean Liedloff's book, The Continuum Concept, she reflects on time spend living with Stone Age Indians in South America.  She observed that without boundaries although there were many dangers like pits, fire, knives, etc. Babies quickly learn to avoid such literal pitfalls and young children are taught and trusted to use what we would consider dangerous tools, safely.

My father said he always knew when my brother had gotten into things in the garage (Uh hum.. fireworks)... but he felt letting him have the freedom to explore that a bit kept him from getting into bigger trouble.

Awsumb's Uncle sent him a fancy pocket knife for his birthday when he was 8... although we had all the safety talks and demos... it still took him getting a small cut while he was working on something alone one day for him to learn the full lesson...

OK, So I am not ready to let my 9 year old take the subway alone in NYC... But, I did let my son cook his own breakfast in the toaster oven this morning...


Visit msnbc.com for breaking news, world news, and news about the economy
Read my review of Nurture Shock

What do you remember doing that you would never let your kids do today?

What things do you think we need to let our kids do again?
Posted by Wendy Jean at 2:38 AM 1 comment