Cancer Sucks - or does it?

The end of summer... Labor Day weekend was ahead of us, school was about to start and then the news came that the current treatment Kenneth's father was undergoing for pancreatic cancer was not working.  Again I argued with Kenneth that it was time to run down to Utah for another quick visit.  Again we argued.  Why must I always be right?  It's such a burden to bear!

So once again we threw things in the car.  Because as I said to Kenneth before, "You're father may never feel this good again!"  Now that the diagnoses had changed and the hope for surgery and a cure was no more... I really hoped for a quiet time to visit with Kenneth's parents.  Time to just visit quietly with them, talk about things, give Awsumb some time, etc..  Of course with the flurry of people this was not possible.  This one was a short trip. And just like before we told Awsumb that Grandpa Hardy may never feel this good again.  And that it could be the last time he gets to spend with him.

I spent most of the weekend with my sister and let the Hardy boys have boy time.  So of course there are no photos because if I ask Kenneth to take a photo will take one blurry one and say, "I got it"  There was about 10 to pick from and I selected the best below.

All I really wanted was a few moments alone with Kenneth's parents.  But it isn't about me. And how do you really say goodbye anyway?  Sunday night the house was full of people, not only family, but friends too.  Duane was just done and already checked out, passed out, practically asleep, but how could he sleep amongst the chaos really?  I knew that was it... it was late, 9 or 10 and I just knew that was it. There would be nothing left and it was time to go.  That was the last time Awsumb spent with Grandpa Hardy.


Duane and the grandkids at a local fishing hole 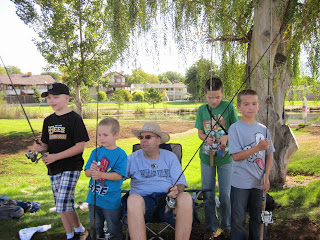 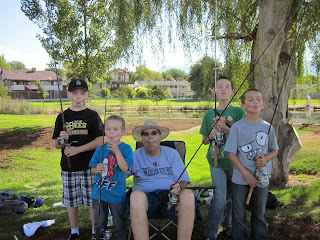 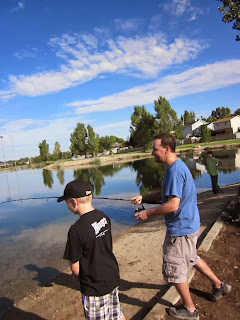 You are going to have to come up with a good fish story for that tiny one! 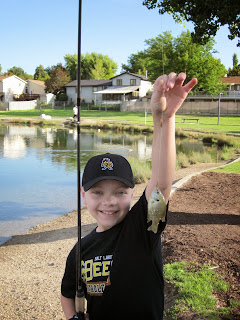 The Last Bees Game
Duane had just a few tickets to the last game of the season.  So he took his best friends, Kenneth, Greg and Awsumb to the game.  I called and arranged to have the BEE visit Duane is his seat and bring them some treats. They also put "We love you Grandpa Hardy!" on the screen between innings.
Salt Lake has the cutest little triple-A field.  Surrounded by the mountains with the sun setting behind you and the moon rising over the outfield... OH, it's still one of my favorite placed to watch baseball. I don't even know who is sponsoring it and what it's name it today, but it will always be Derk's Field to me!  (again this is what you get when you send Kenneth with a camera - not much)
The Field 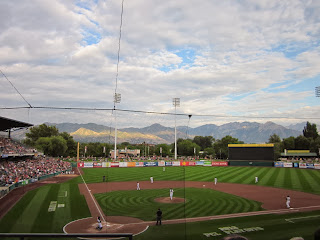 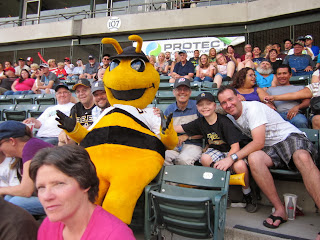 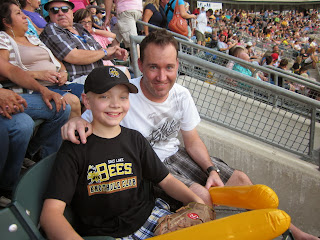 Although this post is dated September (Labor Day weekend) I am writing this after Duane has passed.  After returning from Awsumb's surprise birthday trip to Disneyland Kenneth's father was again in the hospital. After a couple days he was sent home with hospice care.  Again I told Kenneth to go. He thought he might fly in for a few hours. I convinced him to go for the weekend.  His father wasn't communicating much.  But he got to sit by his side, be with his mother and 2 brothers and say good bye.  Hi flew home Sunday night.  By Tuesday evening Duane had passed.

Because we don't live near the Hardy's I don't know how long it would take us to get to the hospital in an emergency situation.  I don't know that there could have been a goodbye.  Or one last fishing trip, ball game or picture.  Because Duane's cancer was found and he chose to take whatever treatment could give him more time with his family, my husband and son were able to spend more time with him.

And because we knew what type of cancer this was and that it was very serious, we had the chance to talk to our son right from that first trip to Utah to help him begin to work through the process of loosing someone dear to him.  I am so thankful my husband and son had this time.  So yes, cancer sucks... but maybe it also gives you time you didn't know you had.

We were so sad to loose Grandpa Hardy.  But having this time to prepare.  And having our faith regarding family, and an eternal plan made this much easier for us.  Kenneth and I had all summer to cry and remember things and even laugh together.  And I hope that by the time his father did pass that although I cannot replace his father, that whatever comfort I could offer was already surrounding him.  I have been so impressed with Kenneth's faith and acceptance regarding the circumstances.