After marrying a self proclaimed Nerd and hanging out with his friends over the years I began to realize there were many different levels of Nerd. And most guys fit into one of more of these categories. Nerd became a badge, a term of endearment around our house even before Apple made it cool to be a Nerd. And these days it seems like just about everyone wants to claim they are a Nerd or a Geek of somekind.

Geek - A Geek is super smart, but might not be aware of his social surroundings. Think Bill Gates.

Nerd - Although a nerd is also super smart, a nerd is interesting, fun to hang out with.  Think technical evangelist.

Jock - Even Jock's can be Nerds. Sports Nerds! And although most sport football jersey's etc. How many of them are really out on that field?

Dork - Dorks thinks they are a Nerd, Geek or Jock, but are none of the above.

And after spending years defining these categories I come across this comic... 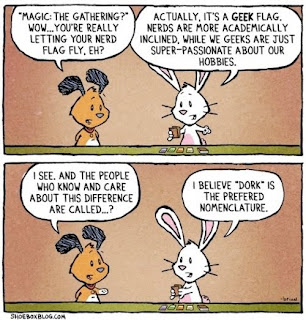 This comic is so great! I love it almost as much as the the Alltell commercial in which the guy questions the nerds, "What level dungeon master are you?" The nerds fall for the trap responding, "Dungeon Masters don't have levels!" Proving their Nerdiness even more! LOL!

CLICK this link and read this entire article and let's talk...
Why Nerds are Unpopular by Paul Graham

The thing about nerds is that...

Well, all my feelings were summed up by this first comment before I could finish this blog post (read below!)
In the end Nerds are the most interesting people, make the most interesting friends and even husbands! And as we raise our little Nerd baby we teach him to love the term Nerd and make it his own! Now if only our educational system could catch up and not only make school a place for Nerds to explore, experiment and thrive, but a place to inspire all kids to be Nerds!
Posted by Wendy Jean at 1:26 PM 1 comment 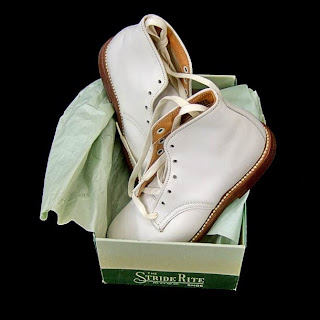 You may have heard this short story before. Though there is no proof Hemingway actually wrote it, it is a beautiful and tragic short story and honestly if you have experienced the loss of a little one there is probably no more that needs to be said. I imagine a brand new, scuff free pair of white baby shoes with tiny laces in a box, stuffed with crisp tissue paper. I can smell the leather and feel the cardboard box. Though many might see this story as a tragic story of a small babies death, if you have ever spent any time in a fertility clinic or made the mistake of buying a baby item before you carried a baby to term this sentence carries much more weight that the 25 innocent letters that made up this complete tale.

When Awsumb was about 3 or 4 he began to realize something was different about our family. Other families had babies and more babies. Ours did not. To this day he tells me on a regular basis how "lonely he is" and asks for a brother. After all these years I think he has come to accept our reality, but when he was little he was demanding answers. I simply explained to him that my body just didn’t work correctly and that HE was OUR miracle baby.

One day, out of no where Awsumb asked me, “Mom is your womb blue?” I couldn’t figure out what he was talking about. “No, I don’t think so?” I replied. “Well, maybe that’s the problem,” Awsumb said. And the conversation ended there.

A few weeks later I went to check on Awsumb before I went to bed. I usually find him in asleep, covered in books and stuffies. This night I found him in bed with his children’s encyclopedia. Ya know, with all those pastel colored pictures and simple statements describing our bodies. The book was open to a page featuring a side view of a baby in a mother’s womb. To represent the amniotic fluid the space was colored blue. When I lifted the book I realized the spine of the book had been broken to turn automatically to this page. It was obvious that this was the reason little Dr. Awsumb had diagnosed my infertility to be “Lack of a Blue Womb.” 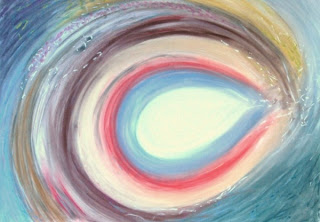 Awsumb’s diagnoses is wrong.
My woom is empty and very blue.
Posted by Wendy Jean at 12:38 AM 2 comments

Where do babies come from? 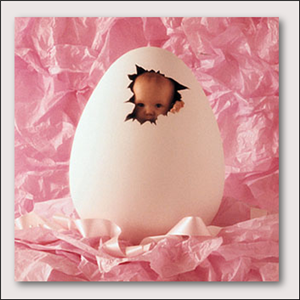 The question every parent dreads...

A couple years after the "blue womb" discussion as we were having dinner at a nice restaurant. There wasn’t anyone sitting too close to us, but it was quiet in the restaurant. Awsumb was coloring quietly and then all of a sudden piped up in a LOUD voice,

“Mom, ya know that special place on a woman that’s hidden….”

The second I heard “special place” I knew we were in trouble. I gripped the table ready for anything as he continued,

And I quickly tried to figure out what I was going to say that would shut him up without him asking more questions OR getting louder.

Then I remembered we recently watched a show on the health channel about a family that had 6 babies at once and the mom had a c-section, which of course grossed Awsumb . So at the time I told him that’s just because the woman had so many at once and that isn’t normal… I guess he had been thinking about this for a while. But as he drew in breath to finish I realized, I didn’t have the luxury of time or privacy to have a very informative talk about this now

“Where exactly is it and what’s it called?” Awsumb asked as matter of fact just as if he was asking for direction to the nearest grocery store.

Why do they always ask these types of questions when your least prepared and in the most public places?
Posted by Wendy Jean at 12:34 AM 0 comments