We made the decision to send Awsumb on our little Spring Break trip solo.  After all sitting around all week worrying about me and my recovery wouldn't be much fun for him.  I also really needed to rest.  So we made some calls and prepared to send him on his way.  That's right, his first solo flight. I was a bit nervous for him, but he felt pretty confident.

To our surprise Southwest Airlines considered and up an adult.  SO he really was on his own.  There was a stop in San Jose, no plane change, but a stop and I was texting with him the entire time he was on the ground!  He did great and I send a new little friend along for him to find in his backpack.

Auntie and Uncle were at the John Wayne Airport waiting for him at the gate and I am sure he was thrilled to see them!  After a couple days with the Allen's he met up with some old friends at Disneyland.  The Erickson's moved to Minnesota a few years back.  Awsumb makes friends easily, but has also considered Caleb to be his best friend.  I was so sad to miss catching up with Kimberly.  But thankful she was willing to spend a few days with him so he could take his mind off things!

Here are a few fun pictures from his trip.... 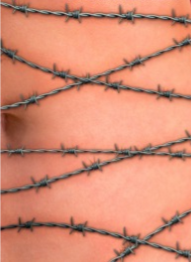 In my adult years these heavy painful periods were debilitating.  We knew that my fertility issues were probably related.  Over the years I gave up on doctors finding a solution because most of them didn't want to do anything invasive if I was hoping to have a baby.  Basically they just kept putting me off.  I'll spare you the details, but I often ended up in the ER due to such heavy bleeding and cramping along with various IBS issues.  I slept with towels covering the bed, overloaded on pain meds and was often house bound while dealing with these extreme symptoms on a regular basis.

The last few years I had been in more pain than usual.  I have felt a lot of pressure on my bladder.  My right lower back hurt all the time and often lifting my leg was extremely painful like I was ripping something apart.  For a time I wondered if I was having kidney issues, but I never had a fever and doctors sent me on my way.  But the cancelled plans and missed events were piling up as I was often found lying on the floor in pain.

Finally after spending the whole weekend together Kenneth decided he had had enough when I asked to leave a Mariners event early.  (Missing baseball?  obviously something was wrong!)  He demanded we go to the ER.  I had already changed into my pajamas and you know sometimes when you are really sick it just sounds better to stay home and be miserable in your own bed rather than sit in the uncomfortable waiting room of the ER.  After a bit of an argument Kenneth said, "Pack a bag, what do you need to take?"  I replied in my typical bratty way, "Fine, this chapstick."

And that's how I ended up in the hospital awaiting surgery with nothing but a chapstick.  The ER doctor found an endometrial mass the size of a softball over my right ovary.  We were planning a trip to Disney and I had already packed my bag as we were leaving on Friday. I begged them to do the surgery after we got home.  The ER doctor firmly told me that I wasn't leaving.  But they would probably only have to do a laparoscopic procedure and the recovery wouldn't be too bad.  As each doctor came into the room they were amazed I had been living in so much pain and kept commenting to Kenneth that I must have a really high pain tolerance.

Actually, did you know redheads have some kind of code in their DNA, the same place that dictates lack of pigment in the skin, that actually makes them less tolerant to pain.  So there... I must really be a trooper.  Anyway I really don't feel the need to prove how much pain I was in to anyone.  Over the years living with endometriosis it's amazing how many people don't get it.  Unless you or someone close to you has never dealt with it you probably just don't get it.

So they scheduled surgery for the next morning, April 1st.  Apparently things were in such bad condition that just a laparoscopic procedure wouldn't cut it and I ended up with the equivalent of a cesarean.  The mass was so large it had obliterated my right ovary so they removed that and the tube.  It was also connected to my bowels and my bladder (yeah, fun stuff)  so they cleaned that all out.  The surgeon reported the other ovary was in pretty bad shape.  It was full of scar tissue and probably has had cysts growing on popping (yes, more pain)  for years.  He wasn't sure that there would be much left to work with, but left it and my uterus so we can take our chances one more time at a fertility clinic.  At this point I feel like maybe we should have just let them take everything.  Kenneth feel extremely guilty that he let this go on so long.

Either way we now realize even more what a miracle our little Awsumb was!  Stars must have aligned for that one to work out because I am just a mess!

Kenneth really stepped up.  He owed me after his two foot surgeries last year!  I don't think Kenneth slept at all the first couple nights.  Back and forth between the hospital and taking care of Awsumb.  We are so lucky to have close friends that stepped up to make sure everyone was taken care of.

4 Days later I was so over the hospital.  Although we had a nice room and a window with a view of the city of Bellevue, and don't forget all those great intravenous pain meds, I was just done with the whole scene.  That last night another mother joined me.  Because a simple curtain doesn't really give much privacy I heard all the details from her doctor regarding her surgery.  Although it was a simple procedure and nothing like I was going through I still felt bad for her.  She had this little girl who was scared and worried. I felt guilty she didn't have the window and the little girl couldn't play on the couch. Also the bathroom was on my side of the room.  So both Kenneth and felt really bad that she didn't have complete privacy on her first (and only) night after surgery.

That night Kenneth went home to sleep as the weeks event were finally catching up with him.  I was more coherent and really starting to wish I could just be home in my own bed.  Then I had the overnight nurse from hell. No she wasn't mean, just forgetful and really did a poor job.  Giving meds with out logging them, logging things hours after not really remembering if she did them...  Basically I didn't want her to touch me!  I feigned sleep when she would come by so she wouldn't bug me.  BUT I did beg her to make sure I didn't go more than 4 hours without my pain meds because I was starting to be more aware of my staples and was kind of uncomfortable.  Plus despite the surgeons thinking I was a total pain trooper, I am really a woos.  I ended up 9 hours with out meds.  Yep, these days you really have to have someone advocating for you at all times. You can't rely on nurses who are probably stretched too thin to keep up.  I am just glad that nothing worse happened because she sounded like she was causing all sorts of havoc on our floor.

So Friday morning I went for a little walk. I was just so determined to get out of there I was bouncing around the room trying to show the doctor I was good to go so they would release me.  When I get back the other mom is packing up. I tell her, "Oh if you get to leave first I am going to be so sad"  and she turns to me and says, "if you knew the kind of surgery I had you'd feel sorry for me."

WHAT?  Um if you knew the kind of surgery I had, the 19 years of marriage with fertility issues... hello it's not a contest!  Who says that?  In the meantime I'm reading stupid April Fools posts on Facebook and such about people so glad they aren't pregnant etc.  Well, April Fools to me.  Major surgery, pretty bleak odds for another child, and the worst was missing my trip to visit Auntie and Uncle and going to Disney to meet up with old friends.

We ended up sending Awsumb on his first solo plane ride to visit Auntie and Uncle.  He had such a wonderful time and I am thankful he is so close to them and that they love him so much to step up and take him!  Awsumb also went to Disney to meet up with our old friends, Kimberly and Caleb Erickson. It's so nice to have family and friends willing to step in and love your child when you need to concentrate on just getting better.  Kenneth and I had a fun week together, just the two of us.  And I appreciated all the visits from friends... and the flowers, oh the flowers!  So fun!  Thank you everyone for all the visits, phone calls, meals, treats and flowers!

Healing was slow going.  About 4 weeks post surgery Kenneth went out of town and I decided to just "get back to normal" and started driving the Ford Explorer and doing regular things around the house.  Uh, yeah, not a good idea.  Major pain and I was put back on strict rest for a couple more weeks. I don't know how women recover from this surgery with a newborn to take are of. Actually I hear that helps because you just concentrate on cuddling that newborn.  A few friends who have had both a C-section with a baby and this type of procedure said the recovery from this was worse.   I'm not looking forward to doing this all over again.  But I do think a planned surgery when I can prepare my family and home for me to be away and out of commission for 6 weeks will be much easier than emergency surgery.