The holiday season has afforded us much needed family game nights to learn some fun new games.  Check out these fun new titles... 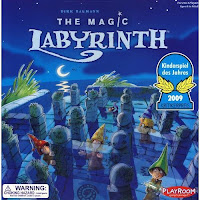 High powered magnets seem to be the new game gimmick of late and are the secret behind The Magic Labyrinth.  Game set up involves moving the walls aroud to create a maze. This is then covered and the board is spun around a number of times before play.  Place the magnetic Magician Apprentices in the corners attach a steal ball under each one.

To begin play draw a lost object from the bag and place on matching symbol on the board. Roll the dice to determine the number of moves, using your memory to find our way around the maze  to the lost objects. The first person with 5 lost objects wins.  Tons of fun a different game every time.  Sound effects reccomeded for more joyful play!
Scribblish 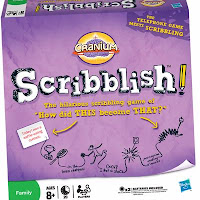 Password Pictionary anyone?  By the creators of Cranium I saw the cheesey commericals for this and begged for it for Christmas. Kenneth gave in and it's really not a bad game.  How else can a bike ride to Saturn turn into a camping trip with a dragon?  Or the Three Blind Mice into a musical saddle?  Best to play with your wittiest friends! 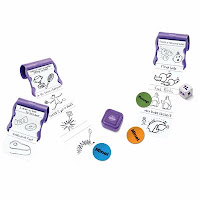 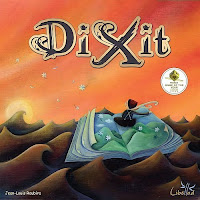 You will fall in love with this game for the artwork alone!  After dealing a handful of cards to each player, the first one selects a card and shares a short phrase to describe a  story or theme. The other players secretly select their own cards which match the description. All selected cards are shuffled and laid out on the table.  Players vote on which one was card was the origional inspiration for the theme. 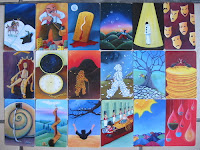 Simply a box of dice with pictures.  Roll and tell a story.  The players make up the rules.  Awsumb has been spending a lot of time writing his own little stories and of course LOVES make-believe.  He picked these up with his own money the other day and has been carrying them around all weekend. The cubes come in their own cute little box with magnetic closure.  This is a great activity for children of all ages. An expansion set of Story Cubes with Action words is also availabe.  Click here to read more about Rory's Story Cubes.
Dixit is a little pricey and the expansion set of cards is just about as pricey as the original.  But, can you imagine the possiblities of the cards from Dixit combined with the Story Cubes?
Posted by Wendy Jean at 10:28 PM 2 comments