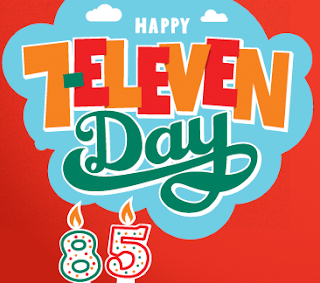 Wednesday, July 11th, 7-Eleven celebrates their 85th birthday by giving away FREE SLURPEES from 11am to 7pm.  Look for special flavors being released this month:  Fanta Strawberry Banana and Lemon Creme Flavor (both sugar free).  7-Eleven expects to give away around 7 million free slurpees this year.
How many will you get?

THE GOAL:
10 free Slurpees!
That's 71.1 ounces of Slurpee per person!
THE RULES:
Only ONE Free Slurpee per 7-11
You must get a different flavor than the one before
(but may repeat flavors over the course of the event)
You must finish your Slurpee before we get to the next 7-11
And of course, obey all traffic laws!
And that leads us to
THE CHEER:
"Suck for your lives!"
Which you will find yourself yelling


as you chase other cars loads of kids
around town trying to get the last of
the FREE Slurpees cups
before they are all gone!
Join us to see how many
FREE SLURPEES
it takes to
FREEZE YOUR BRAIN!
Click to see previous
Free Slurpee Days
2010 and 2011
Epic FAIL!
After waking up to a parade of ants in the kitchen and having an afternoon tea party with pest control and our contracter, there was no time to even stop at a 7-11 before I had to pick up baseball uniforms for 30 teams and be at the field to pass out uniforms AND coach our first scheduled game of the summer season.  The 7-11's around our house strictly stopped serving birthday slurpees at 7pm.  Sometimes life just gets in the way of scheduled fun!
At least we got to participate in 2012's Summer Kick off in May!
Posted by Wendy Jean at 12:00 AM 1 comment

Lego Star Wars That I Used To Know A month ago I found this note in the family room. "Do Not Touch.  Lego Stop Animation In Progress! Do Not Touch! Caution!  Keep Out!"  And since then Awsumb has turned our family room into a LEGO stop animation film studio. He was mostly spoofing stupid commercials and blowing things up.


I showed Awsumb this video and he was instantly obsessed.  Next thing ya know we were put to work helping him dig for specific pieces and minifigs.  We helped him a bit with the timing.  It's basic... but remember - He's 10!  We realized we could have worked on the video day and night and done so much more.  But we have to get out and enjoy what little bit of summer the northwest provides!
Star Wars That I Used to Know by Israel Curtis

No minifigs were harmed in making of this video
Posted by Wendy Jean at 12:32 AM 0 comments