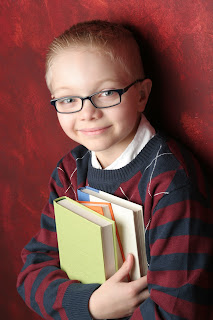 Sometime in the fall Kenneth and I noticed Awsumb wasn't reading as much.  Awsumb has been carrying books  tucked under his arms everywhere he goes since he was a tot.  But each time one of us pointed it out, the other one dismissed it saying, "Let him be, he's interested in a lot of things, he has a huge library of books... he'll come around."  And because we often READ ALOUD (click to read previous post) we let didn't let ourselves worry.

Then our families went in for our annual eye exams we were surprised to hear Awsumb needed glasses.  Awsumb was devastated.  I secretly was excited because I remember trying the little toddler glasses on him when he was a baby.  I kind of figured Awsumb would wear them because Kenneth is practically blind.  I also wear a low prescription.

The good news is that Awsumb will hopefully grow out of his problem in a few years.  And he only needs to wear them for reading.  Which we have interpreted to mean that Awsumb should wear them most of the time, especially for reading, watching TV, any screen time, doing homework, even building legos.  It turns out the extra strain was making it harder to concentrate, which explains why Awsumb hadn't been such a bookworm the last few months. 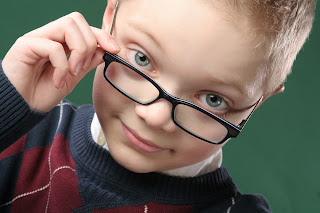 To help Awsumb feel more comfortable I helped him select some classy IZOD frames, which are navy blue with a lighter blue on the inside. I think Awsumb looks so handsome!  Awsumb was still a little worried about his new look, so I decided he needed a special portrait session to mark the moment.  These books are ones that Awsumb is currently reading.  Awsumb read HOLES in 24 hours.  I read this one when it was released and have been dying for him to read it so we could watch the movie.  Which is a good interpretation of the book.  If you haven't read Holes by Louis Sachar to your kids they will LOVE IT and it's a great READ ALOUD book! 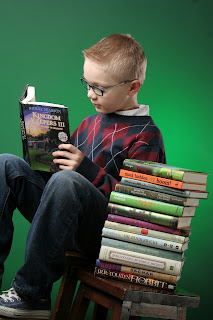 I keep meaning to make a new suggested reading list since it's been a while since I shared
some of my little bookworm's favorite my first chapter books! (click to read previous post)

Awsumb recently finished The Hobbit by J.R.R. Tolkien, which he is excited about because the movie comes out later this year.  And this one is such a classic. Make sure you add it to your child's library!
Awsumb also loves The Keepers of the School by Andrew Clements, one of his favorite Authors... remember Frindle?  Clements is perfect for 4th grade readers.

Any Disney fan should check out Kingdom Keepers by Ridley Pearson about kids that solve mysteries in Disneyworld after hours!  Peter and the Star Catchers is also a fun new series.


Anything by Rick Riordan!  The Percy Jackson 6 book series especially appealed to Awsumb as the series weaves a modern world with Greek Mythology.  I think he is still in the middle of the Heroes of Olympus.  And don't forget the Kane Chronicles about Egyptian Mythology.

How could I forget Awsumb's favorite the Swindle Series by Gordon Korman!  Great for boys who love baseball or just a good adventure.  Follow Griffin as he gets mixed up with a con artist after finding his way into an abandoned warehouse and finds a rare baseball card.   Awsumb brought this one home from a book fair in 1st grade. I thought it looked too old for him, but he sure loved this series, which is probably best for 4th grade and up.
More recently Awsumb also ready Gordon Kormans Titanic Series, which was Awsumb's first lesson in historic fiction. It took a while to convince him it wasn't a true story.  This led him to a study of many non-fiction books about kids in London and New York during the industrial revolution.  And of course to MY favorite author Charles Dickens!

Good for LDS kids:  The Tennis Shoes Among the Nephites by Christ Heimerdinger, which are about modern day kids who find a cave that take them back to Nephite time. There is a whole series available at Deseret Book.   Awsumb also has the Leven Thumps series, which he was yet to begin reading.

Don't forget to keep reading aloud to your kids.  Sometimes with new books Kenneth or I just read the 1st chapter and it's enough to get Awsumb interested and take over the book.  Other times we save certain titles to read together. And it's a great way to introduce books your child might not read alone. I wanted to do with at least the first Little House on the Prairie book, but never got around to it.   Peter Pan, James and the Giant Pach, The Indian in the Cupboard and The Hotel Under the Sand are great Read Aloud titles.  And don't forget books on tape from the library. Awsumb LOVES to listen to books on tape and will often listen to the same titles over and over again!

Kenneth and Awsumb are getting back into The Mysterious Benedict Society about a genius orphan invited to be part of a very mysterious society. And then I think they might get back into The Lemony Snicket Series. 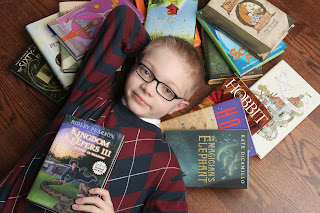 I am so happy to see my little bookworm back in action working his way through stacks of books!  It's fun to see him go between easier reads, longer novels and non-fiction.

PSA - Get your kids eyes checked!

What good children's books have you discovered recently?
Posted by Wendy Jean at 1:00 AM 0 comments