I have never really cared for Rice Krispies.  But I do like Special K and always have it in the house... so one day when I needed to take a quick treat somewhere I made these up and am now sharing my famous secret recipe with you! 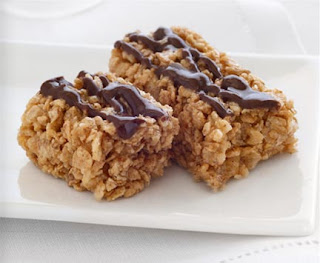 4. Cut into squares and serve with large glass of cold milk!

5. Try not to eat the entire pan, or hide all the evidence so your family doesn't get jealous!

Optional: Drizzle with chocolate as pictured above

How do you make Rice Krispies Treats?
Posted by Wendy Jean at 12:28 AM 1 comment

Why Doesn't Winnie The Pooh Ever Get Stung By Hunny Bees? 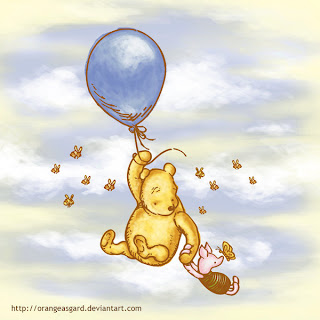 I was stung by a bee the other night.  I have been stung before and knew the second it happened what it was.  it was the underside of my arm, which swelled so much that it wasn't until a couple days later I realized I also had 4 mosquito bites on the outside of that arm...  I have always relied on After Bite, which is basically ammonia to deal with mosquito bites. It stops the itch. This past couple years I have been having a more severe reaction to mosquito bites.  So I had recently picked up some Benadryl gel, which didn't seem to help much...  But Caladryl that really did the trick!  Soothes, stops any oozing, cool and calming, doesn't smell bad at all. I have bathed my arm in this stuff for a few days and it's doing much better!
This  wasn't the first time I was stung. The first time I was shopping in Fred Meyer with Kenneth. The bee was stuck in my finger and Kenneth wouldn't help me!  He just backed away insisting he was allergic ... thanks a lot Kenneth!
Then a few years later when Awsumb was only about 6 months old I had been out shopping all day and come home to a warm house. I laid Awsumb on a blanket and opened some windows. We have these windows that open out, so you lift a flap on the screen, push the window out, then you have to shut the flap. We used to have these rhododendron brushes that wrapped around the side of the house and they were a a major attraction to all types of bees.  So I go upstairs to put away my goodies from shopping and then I noticed Awsumb making this funny sound.  I knew instantly what it was.. he was mimicking a the sound a bee would make if it was swarming around your head!  Remembering that Kenneth is supposed to be "deathly allergic"  I run downstairs to rescue him and find 3 bees swarming around his head and that stupid flap left open on the window screen. I shut the flap, run him upstairs and shut him in by bedroom.  Then I called Kenneth, who refused to come and help... "I'm allergic..."  OK so maybe he was in a meeting of something.. I'll give him the benefit of the doubt, but his friend Robert came to rescue us!
I was able to chase one out the front door, kill a second and totally lost the third.  Needless to say all slept locked in our master bedroom.  In the morning I took Awsumb into his room to change him at the changing table and found a dead bee on the floor. 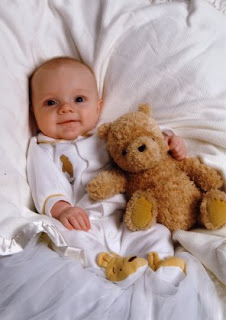 Awsumb 2002 - 6 months
with his Classic Pooh
from our dear friend Robert!
We saw the new Winnie the Pooh movie the other night.  (see Awsumb above with his little Pooh bear!)  I am so glad that at almost 10 he still loves simple things, such as Winnie the Pooh!  As as only child, Awsumb often plays alone.  Awsumb is a regular Christopher Robin, always exploring, making things up and usually accompanied by a "stuffy." 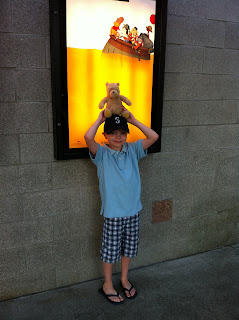 So why doesn't Pooh every get stung anyway?  Maybe he just doesn't notice with all that fluffy stuffing?
Posted by Wendy Jean at 11:59 PM 1 comment