Hardy Boys at The Cubs! 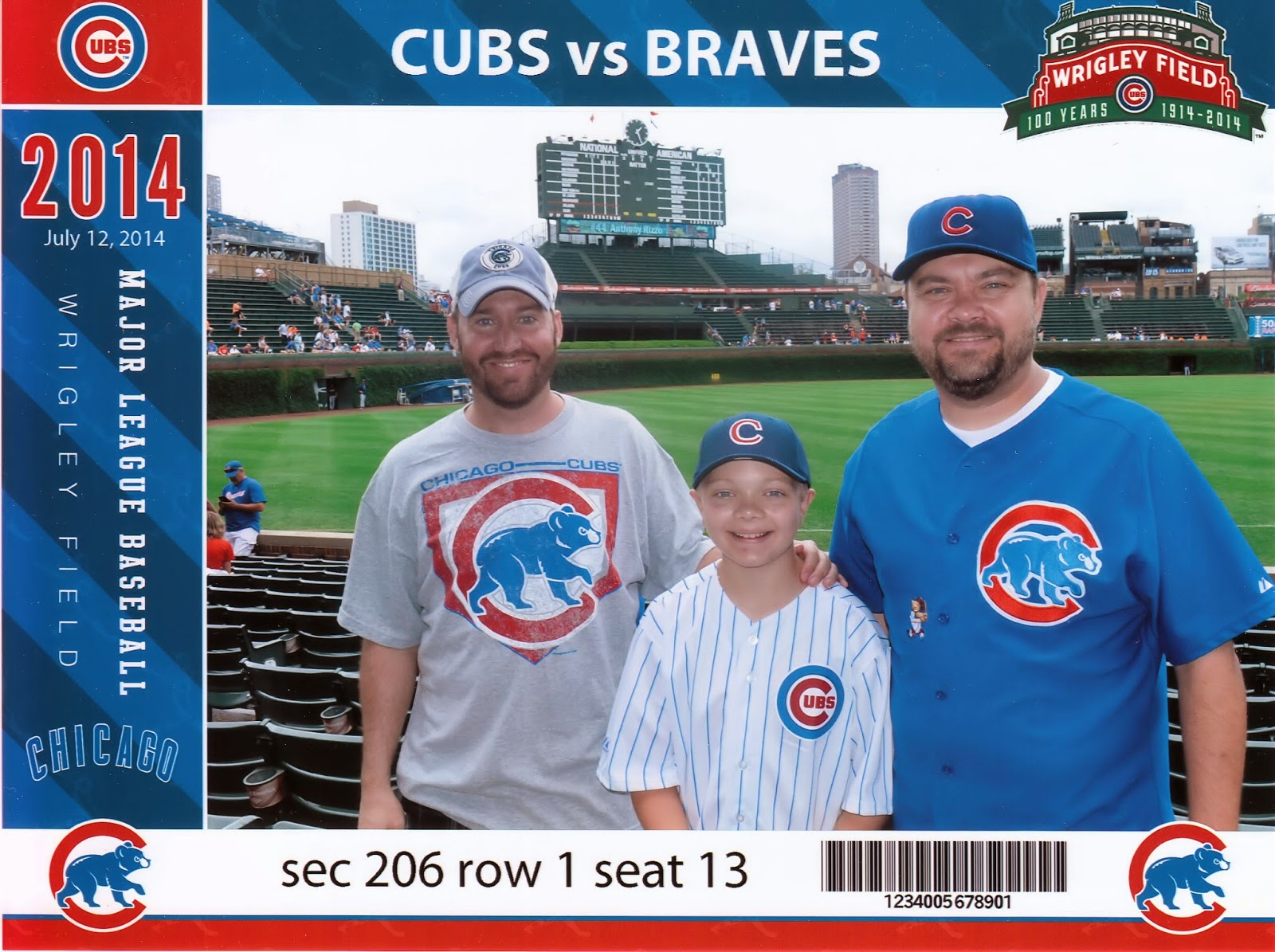 Kenneth really hoped to go to one last Cub's game with his father last year when he was diagnosed with cancer.  We checked schedules and talked about plans.  But Duane was anxious to start treatment. By the end of the season Kenneth started saying "maybe next spring" though we both realized that he probably wouldn't make it past Christmas.  After Duane's passing Kenneth's focus changed to going to a Cub's game and creating new father and son memories with his own son, Awsumb.

Soo when we started making plans to go to Omaha to spend time with Shirley and her parents, just like Duane would do whenever possible, Kenneth tacked on plans for us to catch a game.  The whole trip was so last minute.  And Kenneth didn't even finalize any kind of Chicago plans until a week before we were supposed to fly out.  When called to check in with his mother he was surprised to learn she was already in Omaha.  And that she had driven out with Greg and her sister Cindy.  Kenneth then told his mother of his plans to spend a few days in Chicago and invited Greg to come along with us.  Awsumb was very excited about sharing and making memories with Uncle Greg.

The drive through Iowa was uneventful.  And much longer than expected.  We stopped at the Amana Colonies which are nothing more than a tourist stop these days.  After a late dinner we finally checked into our hotel. 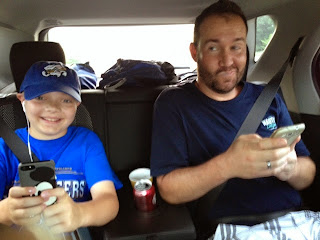 Saturday morning we all woke up early and took the L to Wrigley Field.  It was windy and the weather was threatening us with thunderstorms.  We spent an hour or so checking out the shops and vendors and were among the first few people in line when the stadium opened.  Wrigley is such an amazing stadium. Mostly because although the team never wins the stadium is filled for each game.  And without all the jumbotrons and modern screens the fan experience if focused more on the game.  We had OK seats on the left field down the 3rd baseline.  I think Kenneth and I have sat in that same section before. It's hard to buy tickets to a stadium you aren't totally familiar with.  Because the stands are deeper and lower as apposed to steep, if you sit on a front aisle it's often hard to see over all the people walking by.  But it was OK and everyone was just excited to be at the game. 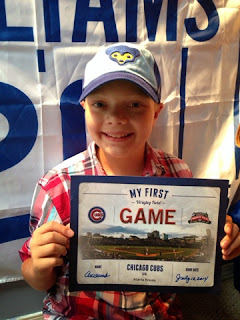 As we were walking over to get Awsumb his "First Time at The Cubs" certificate he was invited to stand in the "kids corral"  right on the field!  Apparently often the Cubs will come over and sign a few balls to kids in that area.  The morning had been raining so their was no on field practice.  But a few of the Braves players came over and Awsumb scored a few autographs and a photo.  By the time the game started it was a beautiful blue sky day!  Although still super hot and muggy! 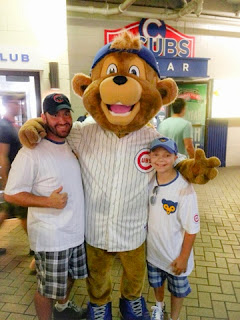 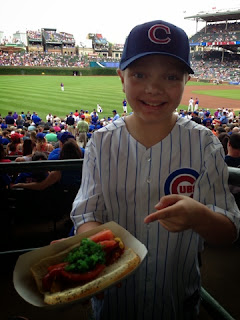 After the game Awsumb scurried over to the dugout in hopes of catching a ball or scoring some autographs.  The security guard passed out official sunflower seeds from the dugout to the kids that were waiting. 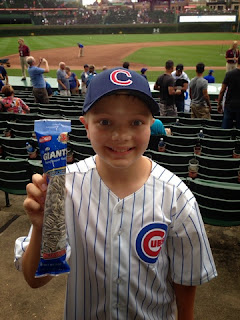 Finally we shopped around the outside of the stadium and that night all slept snug in our little beds! 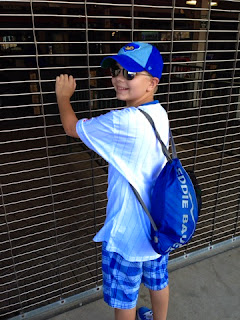 The next day we started even earlier. The boys woke up to find the Cubs Fairy (A.K.A. Wendy) had left them matching Cubs shirts.  Another quick trip on the L. in time to be among the first kids in the stadium to score an Etch-A-Sketch give away.  Awsumb was first in line at the main gate!  We also wanted to be part of the first 1000 kids to get a bracelet reserving a spot to run the bases after the game.  The usher from the day before remembered Awsumb and invited him again into the "kids corral."  Ernie Banks (an old time Cub player) came over to give the kids come instruction.  Just before he left the lady with him took Awsumb's marker so he could sign his ball and then he turned away to move onto the next group of media waiting for him.  So close to an autographed ball!  But fun anyway. 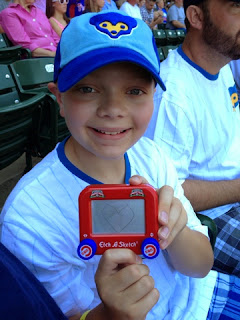 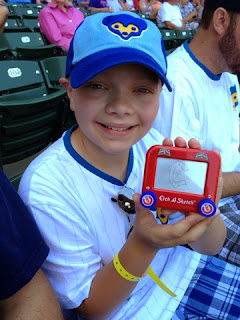 rigley Field is celebrating 100 years so each home stand they celebrate a different decade and wear throw back uniforms.  This weekend was the 60's.  Love those stripes! So fun to make it to Wrigley during the anniversary!  And before the proposed improvements to add a big screen and other such modern expectations of major league fields. 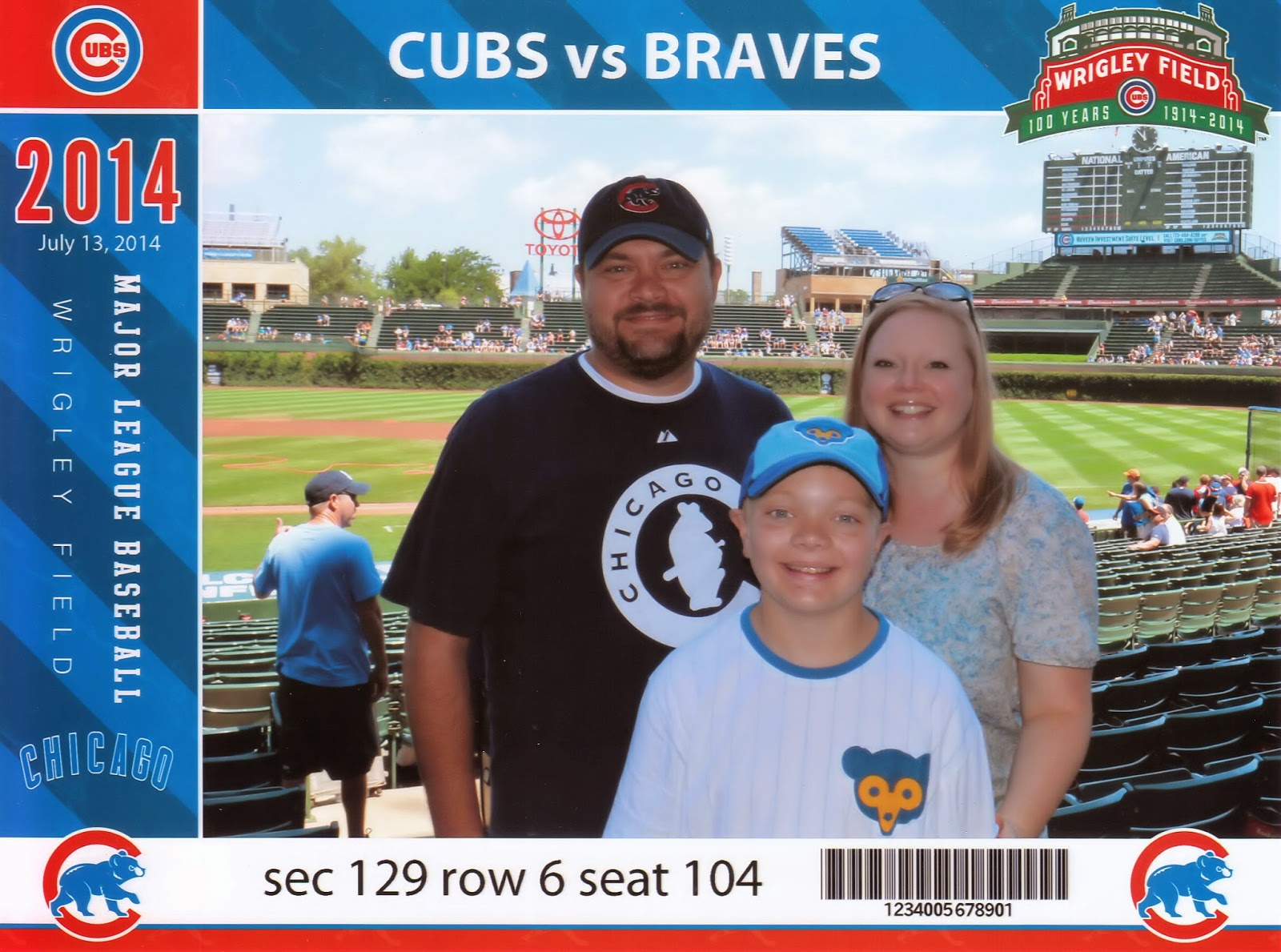 This time we sat on the first base line.  Not too many rows above the Braves dugout. Perfect seats!  And we even had shade for most of the game, which was great because I am pretty much turn into a lobster in any amount of direct sunlight.  After a super exciting game the Braves won (no surprise).

Both games the seat next to us was left empty.  For such a full stadium it was something to take note and everyone commented that Duane was present with us.

Awsumb and Greg went over to line up for the kids run the bases event.  Awsumb was among the last of the kids in line so we waited quite a while for him to come out.  Always the considerate boy he is, he got a slow start making sure not to knock over any of the little kids.  But he picked it up for the end!  Awsumb is so anxious to be grown up.  He has always been 3 going on 30.  But sometimes it's good to still be considered a little kid. How fun to get to participate in the kids run the bases event!

After another long day we went back to the hotel for dinner and the Kenneth taught Greg and Awsumb a new card game.  I surprised the boys with some ice cream sundaes while they were playing and took some time to myself. 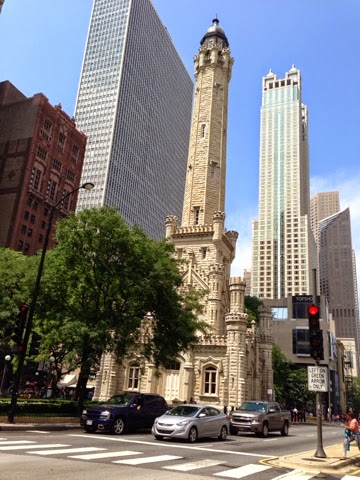 Monday morning the boys decided they were too exhausted to do much of anything.  Going to a movie sounded like a fun idea so after breakfast the boys headed to the theater while I packed us up.  Our flights didn't leave until later that evening so we drove through Chicago and ended up at the Field Museum and Alder Planetarium.  Kenneth and I had scoped it out before as an idea to spend the day there before the boys decided on a movie.  We decided not to do a run through since it was so late in the day at this point and had lunch at the cafeteria and took pictures of the Chicago Cityscape.  Awsumb and I always bring his little pocket kite alone with us on these sorts of adventures and had fun trying to get it in the air. The windy city wasn't so windy that day!

We had such an enjoyable trip to visit Kenneth's Grandparents and are thankful to Shirley for making this happen.  Spending time with Greg was an added bonus.  Awsumb has a special connection with Greg and we were happy to include him as part of our little family for the weekend.

At the airport we said our goodbyes and after delays with both flights we all made it home safe and sound.  Us to Seattle, Greg to SLC.